Eagles are some of the mightiest creatures inhabiting our planet. Their majestic wings, proud eyes and intimidating, but magnificent appearance have always been keeping us in awe.

Eagles are the strongest and the most dangerous of birds we know of. Some of them reach incredible sizes and could easily catch much larger prey.

Eagle is one of the oldest and very common animal symbolism motifs, found in different cultures and traditions, throughout human history.

Bald eagle is a majestic example of eagle species and an animal carrying strong symbolism.

As you probably know, bald eagle is found on the United States standard and commonly referred to as American eagle.

This specie is large, strong, characterized by white feathers on head and tail, yellow beak and legs, sharp eyes and intimidating look and brownish feathers covering the rest of the bird’s body.

Latin name of the specie is Haliaeetus leucocephalus ; the latter means white-headed, which is indeed the most significant characteristic of this incredible bird of prey. For the same reason, people call it bald eagle.

Bald eagles inhabit vast areas of North America, the cover most parts of Canada and United States to northern Mexico.

This beautiful bird is a skilled, agile and a very fast flier. Bald eagles are opportunistic carnivores, though their diet mostly consists of different types of fish.

However, bald eagles would not hesitate to catch a rabbit or a raccoon, an otter or a seal, a prairie dog, reptiles and would even attack an adult bobcat.

Bald eagles are aggressive prey animals and they would boldly fight others who put an eye on the same prey.

Bald eagles are dominant and would easily chase away other animals who feed on carrion. Occasionally it happens that a pack of coyotes, dogs or bobcats could keep them away, mostly young, inexperienced birds. 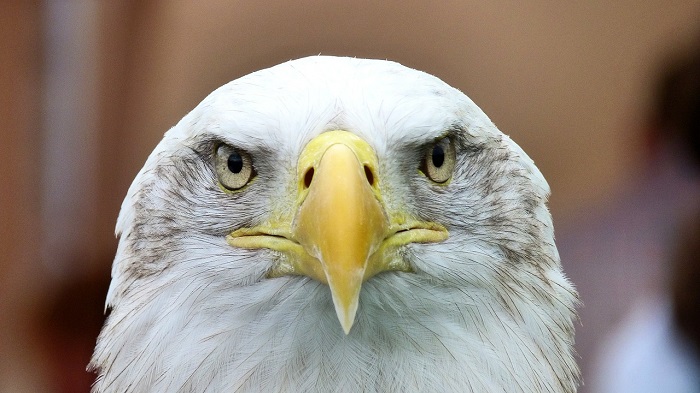 If we turn to spiritualism and symbolic meanings related to bald eagles, it is the same as that of eagles in general.

These remarkable bird species are definitely some of the most powerful symbols of strength, courage and pride.

While all eagles are associated with aggression and even cruelty, they are usually regarded as animals of extremely positive symbolism. Their beauty, their physical strength and other characteristics astound us.

They roam incredible vastness of skies, knowing no borders and limitations in the sense we, humans, do.

Eagles’ strength and the ability to fly free remind us of universal concepts of freedom and liberty not only in physical, earthly sense, but also in spiritual, abstract way.

Bald eagles, just as all other species of eagles, represent the power of nature, the unlimited spirit of nature, higher values. Just look at an eagle’s eye and you will find dignity, power and strength in it.

Various traditions believe eagles are in connection with some higher forces, that they posses incredible spiritual powers.

That is the reason why eagles have always been worshiped in shamanic societies.

We would all like to have a piece of their power, of their free spirit, their limitless world and their courage.

Let us see what universal ideas are associated with bald eagles first.

Since bald eagles are national symbol of the United States of America, we would take a look at this symbolism, as well.

Eagles are universal symbols for freedom; that is exactly the reason why bald eagle has become the symbol of the United States.

Bald eagles, just as most of others, do not have a large number of natural enemies.

They dominate the skies, flying there free and unrestrained.

Bald eagles appear especially amazing, with their remarkable looks.  An eagle’s call reminds of freedom that could be found only and exclusively in nature.

As a spirit animal, bald eagle inspires to reach for freedom, to see above, from above and beyond our physical limitations.

Shape-shifters and shamans would try to enter the eagle’s body and see through this free spirit’s eyes.

Many Native American tribes would seek for eagle’s spirit’s courage and guidance.

In the most spiritual and symbolical sense, bald eagle represents universal freedom, both physical and mental one.

One of the reasons why eagles are so popular in heraldry is their association with concepts of bravery and courage.

It is the same with bald eagles; they represent the same values as other eagle species in other parts of the world.

Bald eagles appear as if there is nothing to intimidate them and make them lose their focus.

These proud animals are spirited, determined and concentrated.

Bald eagles are not only survivors; they are daring hunters and fearsome animals. Bald eagles are typical birds of prey and they do not hesitate when hunting.

As we have mentioned, a bald eagle would attack even an adult, large bobcat, if it were in its interest.

They are feared by other animals and awed by humans. Symbolically, they are ultimate rulers. They represent supreme authority, being so magnificent, strong, intimidating and aggressive t the same time.

These birds represent royal power, glory, justice and determination. They represent independence and ultimate authority. Many countries feature eagle motif on their standards.

Native Americans would use eagle motifs as an expression of authority. Chieftains of Native American tribes often wear impressive headdresses made of eagles’ feathers.

All eagles are associated with the concept of ambition, including bald eagles.

These birds symbolically represent motivation, determination, bravery, courage, daring, focus and freedom, all needed to maintain ambition and carry on with our plans.

Bald eagle stands for progress, development, reaching out to new and distant and inner strength to dare do so.

As a spirit animal, bald eagle gives one strength to endure all the difficulties along the way, enough courage not to lose belief in their goals, willingness to try harder and to seek for more.

All of these should be a positive ambition; a bald eagle may appear merciless in terms of survival, but it ‘plays’ only according to the rules of Nature.

Bald eagle has become a national symbol of the United States of America back in the second half of the eighteenth century.

The first time this beautiful bird was recognized as an American symbol was in 1776, when it was pictured on Massachusetts copper cent.

From that moment, this motif has been commonly featured on other American coins.

Different coins were named after this magnificent symbol (eagle, half-eagle, quarter-eagle and the double eagle).

The bird became the official national symbol in 1789. It is interesting to note that not everyone were satisfied with the bald eagle symbol as a national one.

He believed bald eagle was not a well-chosen symbol, because he did not see it as a positive one. Franklin wrote of bald eagle as an animal that is cruel and merciless, of bad moral, poor and lousy.

Interestingly, Franklin thought a turkey would be a much happier choice, being a native to the land and, in his own words, ‘a more respectable’ creature.

However, other members of the Congress have seen bald eagle rather as a symbol of freedom, strength and infinity. What made bald eagle their choice was the fact that this majestic specie was North American indigenous specie.

Bald eagle, as American bald eagle, has been protected by the National Emblem Act from 1940.

He wrote that bald eagle was a fitting choice, since the bird is of rough beauty, magnificent and inspiring and celebrating the idea of independence.

For Kennedy, bald eagle perfectly reflected freedom and strength that are core values of American society.

However, Kennedy wrote this in order to remind people of America to take care of their national symbol, meaning physically to protect the specie of bald eagle.

Since the days of the Founding Fathers, the population of these beautiful creatures has started to decline.

Most of today’s bald eagles live only in northern parts of North America and in breeding sanctuaries.

Considering all of these ideas about bald eagles, we could conclude it is a powerful animal spirit.

Bald eagles inspire courage and strength in times when we lose it. They remind us how amazing and beautiful, but also cruel and though nature can be.

Bald eagles remind us of our own goals and strength and motivate us not to lose our focus and goals in life.

Above all, they represent dignity and rightful authority.

What Am I To You?

Dreaming of Earwax – Meaning and Symbolism